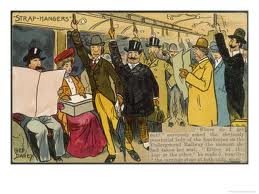 THANK YOU to the Google writers who contributed to my search for information about London’s Underground graphic posters,  I was able to gather some facts about this endlessly, appealing, nostalgic, historic art work.

You probably refer to the Underground as the Tube, once a nickname that comes from the circular tube-like tunnels through which the trains travel. This name was eventually transferred to the Underground system as a whole. I have ridden the Tube extensively while traveling around London where I became  filled with appreciation for the efficiency and connivence of this transportation. I found that a pass was not only more economical than a taxi ride, but connected me to the pulse of this great city. Perhaps you would agree that if you miss the experience of the Underground, you have missed part of the essence of London.

Today, in my powder room, I have a framed Underground poster that I found at the back of a second-hand shop. A new mat covers a damaged brown splotch; some black paint renewed the frame. The poster is of a waiter dressed in tails deferentially standing aside  an an elegantly dressed couple in evening clothes leaves their table. The poster says, The Playgoer travels Underground (Last trains leave central area between midnight and 12:30 AM

The London Underground was formed in 1985, but its history dates back to 1863 when the world’s first underground railway opened.Railway construction in the United Kingdom began in the early 19th century, and six railway terminals had been build just outside the centre of London by 1854: London Bridge, Euston, Paddington, King’s Cross, Bishopsgate and Waterloo. Only Fenchurch Street station was located in the actual City of London.  The idea of building an underground railway to link the City of London with the mainline terminals was first proposed in the 1830‘s but it wasn’t until the 1850”s that the idea was taken seriously as a solution for traffic congestion.  In 1855 an Act of Parliament was passed approving the construction of an underground railway between Paddington Station and Farringdon Street via King’s Cross which was to be called the Metropolitan Railway, that opened on 10 January 1863. Today, London Underground is a major business with three million passenger journeys made every day, serving 275 stations and over 408 km of railway.

Not only the Posters, but the architecture of the stations along the lines are a subject worthy of study. I can’t resist mentioning a few details. Leslie Green established a house style for the new stations built in the first decade of the 20th century for the Bakerloo, Piccadilly and Northern lines which included individual Edwardian tile patterns on platform walls. In the 1920s and 1930s, Charles Holden designed a series of modernist and art-deco stations for which the Underground remains famous. Holden’s design for the Underground’s headquarters building at 55 Broadway included avant-garde sculptures by Jacob Epstein, Eric Gill and Henry Moore (his first public commission).

Frank Pick, who was responsible for London Underground’s publicity beginning in 1908, commissioned the first graphic posters seen by the Underground Commuters to bring about coherent corporate identity and to convey information. Thus began an artistic legacy of many well-known graphic designers, illustrators and artists for its own publicity posters. In my estimation, we owe these creative people a great debt. Let me include a few of their names: Man Ray, Edward McKnight Kauffer, WIlliam Kermode and Fougasse.

The Underground Group, and later London Transport produced a wide variety of public information posters relaying essential information and lifted commuters spirits during the  First and Second World Wars. You might want to check out The London Transport Museum in Covent Garden; custodian for one of the world’s finest poster archives including images over 100 years old. Many of the designs featured were inspired by the creation of the modern graphic poster which dates from the 1890’s and revolutionized the advertising industry. Replicas are available to purchase at the museum or online.

My husband and I retain a lasting image of riding The Tube the morning after Princess Diana died. Everyone sat behind a newspaper, not a word was spoken. That evening hundreds of these same commuters make their way to Kennsington Palace holding small bouquets of flowers. We sat amongst these grieving people all traveling to the same stricken destination. We knew not a soul but we were all connected. If you have a ‘Tube’ story, please feel free to leave a comment or if you are lucky to own one of the Underground Posters, I would enjoy hearing about that too.

Stepheny Forgue Houghtlin grew up in Evanston, IL. and is a graduate of the University of Kentucky. She is an author of two novels: The Greening of a Heart and Facing East. She lives, writes and gardens in NC. Visit her: Stephenyhoughtlin.com
View all posts by Stepheny Forgue Houghtlin →
This entry was posted in English Gardens & Gardeners and tagged Charles Holden, Frank Pick, LeslieGreen, London Underground Posters. Bookmark the permalink.