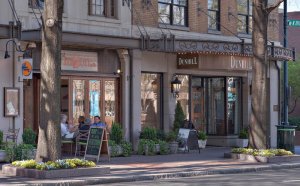 The Dunhill Hotel is among the few National Trust Historic Hotels of America hotels in North Carolina, and is one of the program’s first boutique establishments. The hotel was designed by architect Louis Asbury Sr. who was one of Charlotte’s, and North Carolina’s, leading architects in the 1910s and 1920s. The Hotel originally opened in 1929 as the Mayfair Manor. The ten-story Hotel has been fully restored and is a landmark in the arts community and cultural district. Its refined architecture with neoclassical embellishments adds character and a distinctive shape to the Uptown skyline.

Typical of the architects of his day, Asbury’s practice encompassed many types of buildings: schools, churches, and civic buildings constituted a substantial proportion of his work. For much of his career he employed neoclassical and “colonial” modes along with Tudor and Gothic Revival designs. Late in his career he adopted modernist styles as well.

Fully restored in 1987 and most recently renovated in 2008, The Dunhill now serves as the cornerstone of the city’s art and cultural district which is Spirit Square. The lobby and guest rooms feature elegant 18th-century European furnishings. Here is another significant hotel in the life of a city that tells a story worth honoring. I haven’t had the pleasure, but it is on my list. I’m sure you see why. 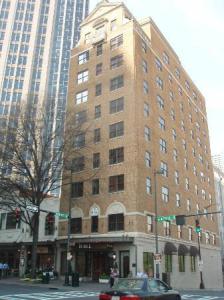 Stepheny Forgue Houghtlin grew up in Evanston, IL. and is a graduate of the University of Kentucky. She is an author of two novels: The Greening of a Heart and Facing East. She lives, writes and gardens in NC. Visit her: Stephenyhoughtlin.com
View all posts by Stepheny Forgue Houghtlin →
This entry was posted in A to Z Blog Challenge April 2016 and tagged Dunhill Hotel-Charlotte NC, Historic Hotel, hotel architecture, Louis Asbury Sr.-Architect. Bookmark the permalink.