It has been some time since I wrote about the author, Nicola Upson’s series of mystery novels. They feature Josephine Tey, (25 July 1896 – 13 Feb. 1952) a Britain’s golden age of crime writing author.  I invite you to take a moment to read the earlier post. 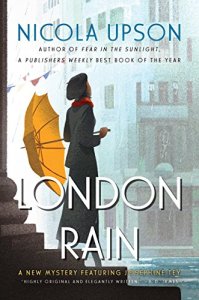 I have finished yet another in this well written and researched series: London Rain. Josephine Tey returns in this sixth installment of Nicola Upson’s series that unfolds in 1930s London as England prepares to crown a new king in prewar England. As an avid reader of the series, I feel Josephine Tey has no better friend than the author, Nicola Upson, who portrays Tey in a respectful, thoughtful manner. She handles Tey’s private life, which was guarded carefully, more openly in the series but through the eyes and heart of a soul mate.

If you are an addicted cozy and classical mystery reader as I am, you will enjoy further information about Josephine Tey to enhance your reading. Tey’s mystery novels are classics of their kind, deftly constructed with strong characterization and a meticulous prose style. Six of the novels feature as their main character the slightly built, dapper Inspector Alan Grant, a gentleman police officer with independent means. Inspector Grant is one of the first Scotland Yard detectives to be introduced to the mystery writing genre, making his debut in 1929 in The Daughter of Time (1951).

Playing a role in the setting of the series is The Cowdray Club at 20 Cavendish Square, London – a professional Women’s Club of which Josephine Tey was a member. She also visited the Costume and Theatre Design Group, known as ‘The Motleys’ at their studio workshop off St. Martin’s Lane where she encountered many members of the acting profession and where characters in the novels abide.  I highly recommend this well-written series. Rather than saying, it was raining in Piccadilly, I love this: “The evening had settled into a half-hearted drizzle, and the roar of daytime Piccadilly died a little as the centre of the West End made its transition from a life of work to a life of pleasure.”

Josephine Tey was a pseudonym used by Elizabeth MacKintosh, a Scottish author best known for her mystery novels. She also wrote as Gordon Daviot, under which name she wrote plays, many with biblical or historical themes. 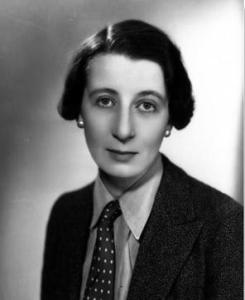 Stepheny Forgue Houghtlin grew up in Evanston, IL. and is a graduate of the University of Kentucky. She is an author of two novels: The Greening of a Heart and Facing East. She lives, writes and gardens in NC. Visit her: Stephenyhoughtlin.com
View all posts by Stepheny Forgue Houghtlin →
This entry was posted in A Writer's Writer and tagged Mick Wiggins-Book Jacket Illustrator, Nicola Upson-Author. Bookmark the permalink.